Types of optical filters for telescopes

The main principle of optical filters functioning is selectively transmitting light of certain wavelengths (certain color) while blocking all other wavelengths. This helps astronomers see more details in planets and nebula.

Solar filters are designed to reduce the amount of incident sunlight, usually in a few tens of thousand times. This allows for safe observations of such phenomena in the atmosphere of the Sun as sunspots and solar faculae. Solar filters are usually made of glass or film coated with a thin metal layer. Never attempt to look at the Sun through a telescope without special filter securely fixed to an aperture as it can cause permanent damage to your vision. You should also avoid using eyepiece solar filters as such filters can fracture due to the heat of the Sun and leave observer’s eyes unprotected. 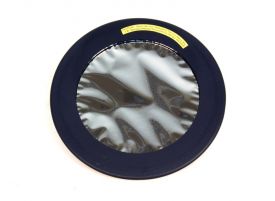 Moon light can also be bright enough to tire an observer's eyes and hide lots of important details. In order to solve this problem, astronomers use lunar filters, which are installed in an eyepiece and block about 80% of light. Besides regular neutral filters, composite lunar filters are also used for this purpose. Such filters allow you to smoothly adjust light transmission by changing the relative position of two polarizing glasses.

In order to reveal certain features on planetary disks, amateur astronomers use sets of color or planetary filters. Such filters transmit particular colors and enhance the contrast of corresponding planetary features. For example, Mars, the red planet, shows more details when observed through green filters as it suppresses red color, the overwhelming color of the planet's surface.

Color filters usually have numeric values assigned to them according to the Wratten/Kodak system and show the following typical features of the planets. For Mercury red filter #25 is used to make the planet's disk stand out from the blue sky in order to observe it during the day or in twilight; orange filter #21 is useful for observing the planet's phases after the sunset. In case of Venus it doesn't ever matter what the aperture of your telescope is; it is always too bright. Violet filter #47 or green filter #58 combined with blue filter #80A are suggested for reducing the planet's glare and viewing the phases. When observing Mars, the red filter #25 will show plains and maria, and orange filter #21 will increase the contrast of small details. Dark-yellow filter #15 and blue filter #80A are great for observing polar caps, while green filter #58 will show you polar caps' melt line. Jupiter, the largest planet in the Solar System, will demonstrate its belts, zones, festoons, ovals and Great Red Spot if you use filters #80A, #58 and #21. Dark-yellow filter #15 enhances lots of faint features on the disk of Saturn. Filters #25, #58 or #80A will help you notice the difference in the rings' brightness. Filter #15 is also useful for astrophotography as it sharpens the view and accentuates the Cassini Division. For lunar observations, filter #80A is used in order to reduce the Moon's brightness, and filter #15 will increase the contrast of lunar rilles and other features of lunar surface. 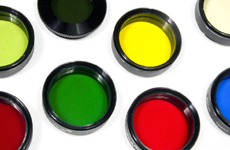 In addition to this, filters #15 and #80A reduce chromatic aberration in refractors. Green filter #58 partly suppresses light pollution and transmits the light from doubly-ionized oxygen (OIII) of emission nebula. Red filter #25 is able to reveal the glow of hydrogen nebula during long exposure astrophotography.

When observing under urban illumination conditions (in the city or suburbs) it is best to use special filters called light pollution filters. Such filters are also often referred to as broadband filters. These filters efficiently block the light from incandescent lamps, mercury-vapor and sodium-vapor lamps, which are used for illumination in cities. At the same time they transmit the wavelengths that are emitted by nebula (H-alpha, H-beta and O-III).There are also narrowband filters, which transmit a narrow band of the spectrum. These filters are usually recommended for nebula observations as they significantly increase the contrast of emission and planetary nebula; contrast of galaxies and reflection nebula is increased imperceptibly. Such filters block the light from fluorescent and incandescent lamps.

Another group of filters for deep-sky observations are filters designed to transmit light of particular wavelengths. For example, O-III (doubly-ionized oxygen) filters are used for observing planetary nebula. H-beta filters isolate blue-green glowing of faint emission nebula like Horsehead Nebula or California Nebula. There are also comet filters, which capture the light from specific chemical compounds (for example, cyanide). 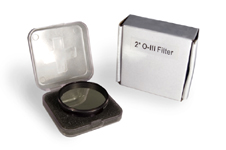 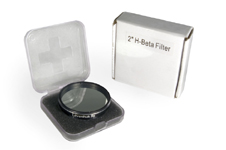 Any reproduction of the material for public publication in any information medium and in any format is prohibited. You can refer to this article with active link to levenhukb2b.com.

The manufacturer reserves the right to make changes to the pricing, product range and specifications or discontinue products without prior notice.